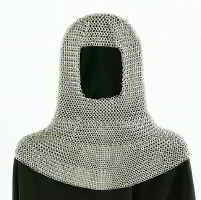 The wearing of chain mail and body armor has been an effective means of protection in combat and war for centuries. Its use dates back to the Greeks and early roman empire where warriors and legionnaires donned metal plate and mail armour. The medieval era knights are most remembered for their elaborate Armor and battle shields in brilliant colors. But a knight's armour was more that protection. It reflected his status and lifestyle. The quality of the armour was as important and the overall look and the battle efficiency. Indeed it was a fashion statement also. The evolution of chain maile and armour through the Maximilian era was a direct response to improvement in weaponry of the time. As weapons became more sophisticated, so did the thickness of the battle shields and the armour of the knight. Most had to not only be effective against attack but also flexible and agile.

The period of plate armour runs from about the early 1300's to about the mid to late 1500's. During this medieval time period the evolution went from a few pieces of plate to entire suits of highly crafted works of art in metal. Prior to this time, chain mail was the most prevalent and effective type of body armament. Maile weighed about the same as full body plate style. The average weight was about 45 - 55 pounds. However, a well made suit of plate armour was more comfortable to the wearer because it could be more evenly distributed over their body. It was always worn with padding and protective clothing to further protect and insulate from the heat and cold. The mid fourteen century was the period wear knights wore both type of body armour. During this time period, it was difficult for the warrior to get back up on if knocked down due the combined weight of the plate and the maille. By the early fifteenth century, most all body armament was plate as the designs and flexibility improved. A mid sixteenth century knight in full plate armour was surprisingly agile due to proper fit on the wearer.

The onset of the modern gun spelled the swan song for full body armament although body armour is worn even today in a more modern form such as kevlar (tm) vests and such. Even still we romanticize this period of European history. The medieval knight is well engrained in our minds and impressions of the medieval period.

We have a large selection of swords, suits of armor, battle shields and helmets. You will find the best prices and helpful people.

We have a secure severer if you wish to view and order online. Full SSL security measures are implemented at checkout to protect your credit card numbers. Credit card numbers are never stored online.

Payment Methods We accept most major credit cards and PayPal