Have you ever been to an armor website and wondered "what in the world is a lorica segmentata ", or looked for the history of it and never found anything? Well, look no further, we are here to tell you everything you could possibly want to know about the lorica segmentata roman armor. The lorica segmentata was a type of armor used primarily in the Roman Empire at the end of the 1st century B.C. and continuing until the middle of the 3rd century A.D. The first reconcilable fragments of the lorica segmentata were discovered at Bad Deutch Altenburg in Austria (the legionary base of Carnuntum) in 1899. However, it wasn't until the discovery of the Corbridge Hoard-a wooden box containing 12 sections (six shoulder and six torso, none of them matching) at Corbridge in 1964 that it was possible to interpret it without the help of sculptural evidence. Thanks to painstaking reconstruction of the rusty fragments by archaeologist Charles Daniels it was possible for H Russell Robinson of the Tower Armouries to make the first working replica. 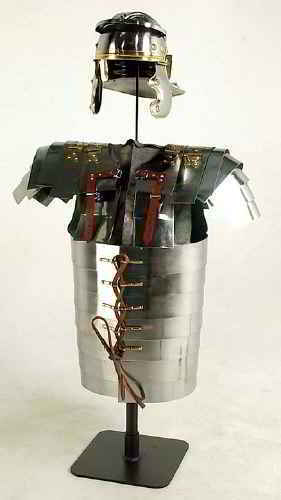 With such a strange name, one couldn't help but wonder where the lorica segmentata got its name. It was best known from the spiral reliefs on Trojans Column in Rome and it was sculptures of this type that first led scholars to study it. In order for scholars to study this piece, they had to think of a name for it. Since most scholars at that time wrote in Latin, they decided on the phrase (armor in pieces). This Latin name was first used in the 16th century. It is still referred to by that name but you may also find it described as segmental, articulated, plate armor, or even Schienenpanzer.

This particular armor was made up of four sections: two for shoulders and two for torso. The Lorica Segmentata  armor itself consists of broad ferrous (iron or steel) strips fastened to internal leather straps. The strips were arranged horizontally on the body, overlapping downwards, and they surrounded the torso in two halves, being fastened at the front and back. The upper body and shoulders were protected by additional strips (shoulder guards) and breast and back plates. This form of armor allowed it to be stored very compactly since it could be separated into four sections. The main concern with this type of armor was its complexity leaving it vulnerable to attrition and corrosion.

Around the time of Emperor Tiberius (A.D. 14-37), lorica segmentata began to replace the older lorica hamata (mail cuirass) in many legionary formations. This new armor was generally considered to be superior to the lorica hamata because of it's greater flexibility, lighter weight, and its comparative ease to manufacture. It is believed that only legionaries (heavy infantry of the Roman legions) were issued with the armor. After Commodus (Marcus Aurelius's son and successor) died, the empire erupted into civil war, eventually won by Septimus Severus. These wars of succession (193 A.D.-197 A.D.) can be viewed as the last gasp of the armor. It was no longer a necessity to new recruits and had already become a very rare sight although similar armoring techniques were still used during the 16th century, employing sliding rivets and this was known as Anima.