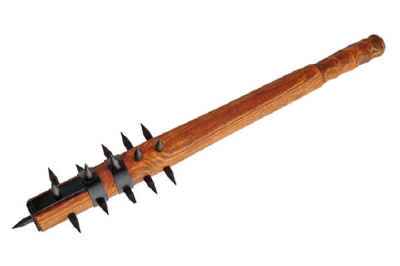 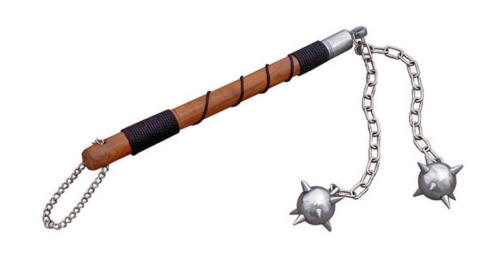 The Medieval Mace - Turned Tool of the Farmer

We look at the flailed or spiked mace with trepidation in this age, imagining the harm that was dealt to the human frame as it was employed in battle. But did you know that the mace has its origins in agricultural tools? A grain flail is the name of the long handled tool that, while used in some primitive cultures today, was the mainstay of the farmers of early times as they threshed their grains to remove the hulls.
These tools were easily converted when the farmers or the tenants were called to help defend their homes in time of war and the peasant armies began to adapt their two- handed, long handled weapons into shorter ones. The two handed flail eventually evolved into the one handed mace.
The two handed version was first recorded as being used in battle in the Czech Hussite Wars in the mid-15th century. Jan Hus was a Bohemian priest and reformer who fought against the monarchs who supported the Roman Catholic Church from 1419 to around 1434. The Hussite armies, which continued to exist until about 1497, employed large numbers of the peasant farmers and they first used their grain flairs, then a modified version that remained their main weapon. The implement was outfitted with spikes on the end of it which greatly improved its ability to not only fend off but to harm an attacker much more effectively by dealing a blow to their enemies’ shield or body. However, maneuverability was an issue with this two-handed flail mace being the same length as a hoe.
By the early 1500’s, the short style, one-handed mace began to replace the two-handed flail mace and by 1530, the Morning Star, the Swedish mace which was slightly longer than most short handled mace, made its appearance with a chain as long as the handle with a spiked ball on its end. This allowed for close formation fighting with better accuracy and the ability to be more flexible with movement. Most styles of the mace, whether French, Swedish or German had the long chains to keep the user from hitting their own hands, although some earlier versions did not have this and required great skill and luck not to bash oneself during battle.
Another style of mace is very old and dates back into antiquity and that is the club. It may in fact have been the first weapon when a caveman picked up a large stick of wood and used it to fend off a predator or kill his dinner. Around the Early Paleolithic period, the wooden club evolved with man, becoming slimmer and more precise and balanced for use with stone, flint, obsidian and even earthenware attached to the ends. These first maces were easy to shatter and were not attached with more th an twisted gut string progressing to leather, which did hold the ends on the weapon past a few strikes. By the Bronze Age, the ability to craft a fiercesome end, a club mace with spikes, knobs or flanges that could bash and bend the newly crafted armors, was available with the newly discovered ores and metals.
The Medieval mace was usually made of iron although some other metals were used in iron poor areas. Since most had armor by the 15th century, the club mace and the war hammer were employed, as the chainmail and armor used by most armies could withstand the arrows from archers and the swords of the knights in cavalry. The medieval mace would have been found with those who were engaged in hand to hand combat as these could damage with impunity through the armor protection.
Even the best armored knights would have taken a deep breath when faced with an opponent with a mace, whether club style or chain ball, as these were hard to avoid and made a formidable offense weapon. These weapons were very common during this era and remain with us even today as a weapon used for close contact attack and defense.
The medieval mace was appreciated and respected, even appearing in heraldry and coat of arms that remain today in the displays of certain cities in France and other parts of Europe. It was a weapon of great power that required skill and speed, good timing and precise application. The early medical drawings of European physicians actually outline the results of this weapon and show the damage that it could produce on the human body. Barbaric but effective, deadly even in its design, warriors armed with these in medieval battle had little to fear.