The image that comes to mind when Medieval axes are mentioned is one of a fearsome Dane or Viking issuing a battle cry that is enough to curl toes, even now echoing through the ages from a time long past. These were horrific instruments of death and massive injury and came in many sizes. It could be long and large in the hands of those big enough to handle or small enough for those duel wielding or using a shield. These weapons stretched across most cultures of the Old World, with the culture’s imprint on their weapons, changing with advances in metalworking and the imaginations and needs of those who wielded them. Axes have been with us since the first cave man needed to cut into a tree. The fact that it doubled as a very effective weapon against man and beast was just a plus as it was probably first a tool. Axes were commonplace tools in most households through the 19th century and anyone with a real wood fireplace today still finds them handy. There are many artifacts of axes from the Stone Age that show a very simple style and at first, were only the stone itself. This hand-held tool eventually became a chiseled rock attached to a carved hard wood pole with leather straps that allowed more strength to be applied to its task. Once the Bronze Age arrived around 3000 BC, copper, then brass, allowed casting into blades that were attached in a similar method. By the Iron Age (1000 BC), axes had advanced to more complicated styles and ceased to be used for both tool and weapon. Some were now just weapons, capable of deadly blows with long handles and great blades on some. These sturdier, more powerful weapons were in full abundance by the early Middle Ages. The battle axes could be up to 5 feet in length and the shorter ones averaged around 1 to 1.5 feet. Either could be thrown like a missile. By the 1300’s and into the Renaissance era, foot soldiers in Europe frequently could be found carrying two axes into battle. A long handled axe was good for initial encounters and a short axe could be used for more personal confrontations. Poleaxes and one handed axes with spikes or hammers on one side and blades on the other were good for different uses in a battle. Axes varied in purpose and looks as some were heavy enough to crush armor and others light enough to throw like a hatchet. No matter how they were used, they were capable of inflicting much damage to the human form up to and, very much, including death. This medieval medical chart has always fascinated me and brought home more than anything else what these weapons were truly about. They were made with the intent to protect the owner during battle with as much damage to his enemy as possible. May you always be blessed with a weapon sheathed. 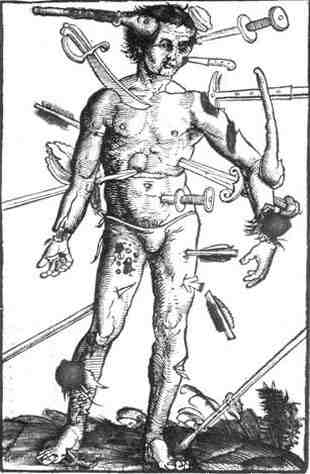